When it comes to restoring a classic car, some journeys are easier than others.

In many cases, the ability to easily restore a car doesn’t have to do with the actual wrench-twisting, but rather the money and effort you will need to put in to not only find the car itself but also the replacement parts you’ll need to finish the project.

We’ve put together a list of ten of our favorite classic cars that also happen to be easy to restore.

While the purchase price might be higher than some of the other choices on our list, a late 60’s Camaro is fun to drive, reliable, and relatively easy to repair. Plus, with the extensive aftermarket for performance and replacement parts, the Camaro is one of the easiest classic cars to build just the way you like. See our selection of products here.

Though not as popular as a Charger or Challenger, we include the more compact Dart on our list because they are easy to find, have a reputation for reliability, and both the car and the parts you’ll need are more affordable than other cars of the era. The Dart came in a variety of engine configurations and trim packages, so it shouldn’t be hard to find something to love. Here are some of the parts we have in stock.

While earlier model GTOs can be expensive, models from ‘71 and ‘72 keep the same aggressive, iconic styling but can be found at a more reasonable price point. The aftermarket community has produced tons of body and trim parts, as well as enough performance upgrades to keep a smile on anyone’s face. Here’s what we have in stock at Legendary.

Thanks to their basic body-on-frame construction and easy to find parts, restoring these Chevelles is pretty straight forward. Skipping the more expensive model years from the 1960s and picking up something a little newer will make the whole process easier on the wallet, as well. Here are some of the Chevelle parts we have available.

Though the more hardcore fans want a ‘70 or ‘71, picking up a ‘73 or ‘74 will come with a much smaller pricetag. These ‘Cudas are all easy to work on and fun to drive, and the extensive supply of replacement parts on the market makes restoration a smooth process, even for someone new to such projects. Find our selection here.

The Oldsmobile Cutlass was one of the best-selling cars in America during this time, and plenty remain on the road. Because parts can be swapped with any GM A-body vehicle, finding replacement brake and suspension parts is cheap and easy. It’s a little harder to find exterior body and trim parts compared to a Chevelle, but the effort will be well worth it. Check out what we have in stock.

Thanks to its distinct design, the AMX enjoys an active enthusiast community, and a strong aftermarket part supply has emerged to support it. Some models remain pricey, but the cars themselves are pretty basic and not difficult to restore. In addition, many of its mechanical parts are interchangeable with those from the Big Three. See what we have in stock here.

One of the most iconic muscle cars ever built, Chargers are fun to drive, handle well, and—thanks to high production numbers—are relatively easy to find. A vast aftermarket means you’ll have no trouble finding a replacement for any part you need. Here’s what we have for your Charger.

The redesigned Nova was a massive success for Chevy, with over one million built. Almost every part you’d need can be found from a range of suppliers, and can be had for a fair price. In addition, a wide range of performance upgrades are available. Take a look at our selection.

These second generation Firebirds have grown more popular as the price for first-gen models soars. You’ll have no trouble finding reproduction parts from many suppliers, including new body panels. These cars are easy to restore and—should you ever want to—easy to sell. Find our Firebird parts here.

As you have seen from our list, the key to finding the easiest classic car to restore is picking the right vehicle. Finding a ride that is supported by an enthusiastic community of fans, as well as an extensive range of aftermarket parts suppliers, puts you on the road to success. 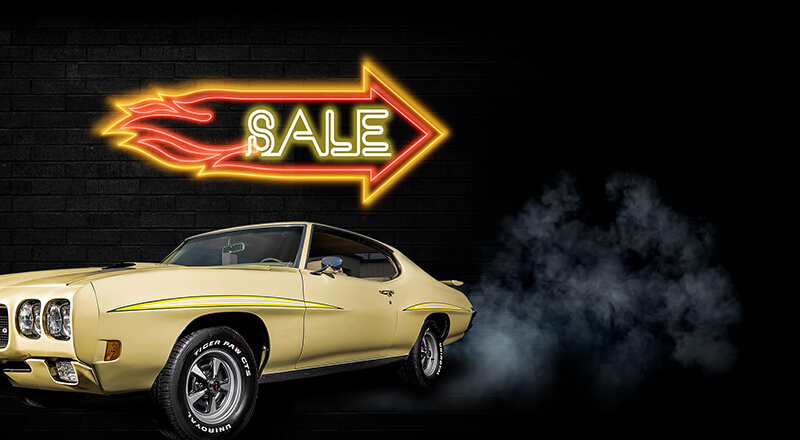 Charger vs Challenger: Which Classic Dodge Comes Out on Top?

We’ve come to the end of this round of our Legendary Classic Car Stories! For this final installment, we are highlighting the work of our Pontiac and Oldsmobile fans. Keep reading to learn all about the path they took to…

It’s time for a new round of Legendary Classic Car Stories! This month, we are featuring three stories submitted by Legendary Auto Interiors fans, all of which happen to own AMC cars. Read on to find out more about their…

We’re back with another round of Legendary Classic Car Stories! This month, we have three more stories submitted by our amazing Legendary Auto Interiors fans. Read on to find out more about their unique classic car restoration journeys. A Perfectly…